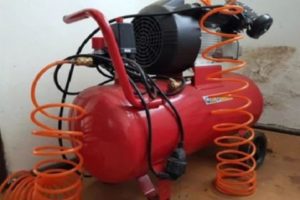 Machines have brought much ease to human life, which can’t be denied. One of the useful machines used on both lay and professional levels is the air compressor.

Because of its uses in different domains of life, its demand is more than other machines.

An air compressor is a versatile machine that can be used for various purposes.

It can serve homeworkers, factory workers, cleaners, mechanics, etc., and this shows the range it can cover.

Because of their use, they have become smart and less bulky with time.

Many people want to know what an air compressor does. It can be explained from the procedure of how it works and its uses.

Here is a brief discussion of both of these aspects.

The multi-purpose use of air compressors ranging from household jobs to professional uses has become a piece of daily use equipment.

It is for this reason important to know the working of air compressors and the basics of it.

It is a simple device that can be used to change the atmospheric pressure of air to a given range.

Thus, increasing pressure can create potential sources of energy that can be used for different purposes.

This energy is then utilized in different forms and applications for various uses.

The range of uses of air compressors varies from inflating toys, tires to impact wrenches, etc.

It is important to know how an air compressor works and how it can be best used.

Here is a brief overview of what an air compressor does.

How does it work?

Before understanding the applications of an air compressor, the main idea is the comprehension of its working mechanism.

Today, many workers in workshops use air compressors for their daily jobs as they have seen a shift from mechanical devices.

The main idea behind the air compressors is their forcing air and increasing pressure on it.

The air taken in is pressurized, and then it is released to the required device for its use as an energy source.

The working of air compressors depends upon their types, and the main types are discussed here.

It is the method for air compression that categorizes them into different groups.

In this type of compressor, the air is forced into the tank, decreasing the air’s volume.

It compresses the air where later it is used for different jobs. This type of compressor is used on both industrial and lay levels.

Three types of compressors use this method for air compression. These are given as follows.

Rotary screw compressors have found wide use because of its simplicity.

It consists mainly of two screws moving in opposite directions.

These are used to capture air, and then it is compressed. These screws create movement and thus add to the pressure.

This compressor is one of the simplest and can be easily used and repaired.

A rotary vane compressor uses a tank with rotor vanes instead of screws.

These are constantly in movement, and as a result, they create pressure through this movement.

The air compression process takes place at the casing and vane. It is later pushed to the exhaust port for use in machines.

Piston compressors have pistons as the main difference from other compressors.

The piston pushes air inside the compression area.

These pistons control the crankshaft and ensure that the entrant gas is highly compressed for use.

They have a basic problem, i.e., limited use; they can’t be used continuously.

Single-stage and two-stage compressors are two types of this compressor based on compression chambers.

The single-stage has one chamber, while the two-stage has two chambers.

In this case, one is used for air compression while the other is for functional purposes.

This air is then moved to the air compressor for further process.

It has two types which are axial and centrifugal compressors.

A series of turbine blades in this type of compressor pushes air into the compression area.

Inside the compression area, static blades slow down the flow to compress air.

Axial compressors are used on a large level like aircraft and large compression plants.

There is a rotating impeller in this compressor, which forces the air into the compression chamber.

The centrifugal force is used to push the air forward. A diffuser is used in the inner section for compression.

This type of compressor uses high-speed motors for compression.

These are simple machines that use the conversion of potential energy to kinetic energy.

Thus, when this energy is converted, it helps with jobs like inflation, cleaning, movement of machines, etc.

Understanding what a compressor does is easy, and it can be done by comprehending the basic principles of its work.

Ivan Sanchez is a passionate blogger, traveler and certified Mechanic and moreover owns a Mechanic Shop in Norway too. He loves Painting Cars, Fixing them and a lot more. His father had a shop too where he used to sell Air Compressors, that's where Ivan learned about it and now reviewing some top-notch air compressors through this blog for you.