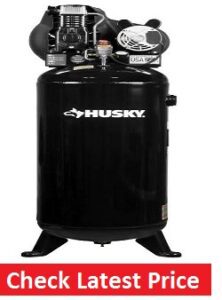 It is a risk to invest in a mid-range 60-gallon air compressor for heavy-duty applications of commercial standard.

And if the unit has an economical cost, the warning bells that will rise might even be heard on Mars.

There’s a unit in the market named “Husky 60 Gallon Air Compressor” that commercial users and passionate DIYers love to buy regardless of its medium size and comparatively lower pricing.

In this review, we took a closer look at its construction and performance to help you understand why it enjoys such praise even in the presence of expensive counterparts.

It’s not 100% free of flaws, but its sturdy built with an immense amount of power to support several tools simultaneously overshadows the shortcomings.

So, if you aim to own a sturdy air compressor having huge capacity and value for money, buy this model.

What Makes Husky 60 Gallon Air Compressor Stand Apart from Others?

Husky (C602H) 60 Gal. air compressor stands apart from the rest of its clan because it houses qualities like heavy-duty structure with maximum protection, user-friendly operation and lower pricing. 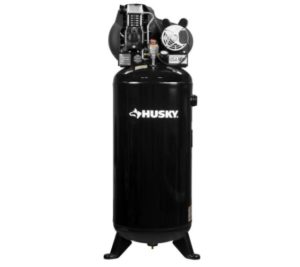 This one is another best gift from Husky. I consider this unit a present because what else would you call a vigorous air compressor having incredibly modest pricing.

Its twin-cylinder pump is of cast iron that lasts longer and is comparatively quieter.

Calling its operation quieter with 82 dBA is stretching the truth.

As for the pump, it is oil-lubricated to enhance durability and help you squeeze the most out of the money.

The unit weighs a massive 208 pounds, but its vertical anatomy with a tripod stand will neither take much room nor vibrate like an earthquake.

It might not be an industrial level costly unit, but the heavy-duty motor with 3.7hp and 230-volt electric plugging can cater to all your power requirements.

Meaning, it has plenty of power to disperse to cater to all your needs, whether they are related to home projects or commercial-grade projects.

The presence of a 60-gallon tank with 155psi optimum pressure means you will rarely run short of air when running tools like airbrushes,

Before you raise any objection, let me clarify that there won’t be any overheating.

The integration of thermal shutoff along with belt guard doesn’t allow it.

As for its operating mechanism, it’s sheer delight. Its large pressure dial is easy to observe, while a simple control panel with an on/off switch doesn’t require a specialist for running it.

If you still have some doubts about this product, I am sure the offer of a 2-years warranty will blow them away.

All in all, I would strongly advise you to spend money on it if you’re after a powerful air compressor that lasts longer and can undertake heavy-duty applications, yet neither comes in full size nor costs a fortune.

Husky air compressors do not belong to the elite class, but this unit can last longer than even some expensive opponents.

The reason for this nip and tuck affair lies in its twin-cylinder cast iron pump that entails a message of durability and a prolonged lifetime.

The said pump is oil-lubricated and thermally protected, which further proves the unit’s promise of permanency.

You will admire the vertical figure of the tank paired with a tripod stand as it reduces the footprint and vibration.

Meaning, you can place it in a limited space, but the 208 pounds weight won’t allow you to move it around as much as you want.

Believe it when it claims to never dry up of power or compressed air even when run all day for drilling, painting, nailing, fastening, inflating, or other jobs of the like.

Whether you run it in a commercial workshop, a DIYer’s garage or a domestic setting, you will not witness dwindling in its productivity.

The induction motor rated with 3.7 horsepower and protected with a belt guard is responsible for its ability to endure such a heavy-duty workload.

The 60-gallon compressor claims to touch a pressure limit of 155psi. In a decoded term, it means the unit allows you to run multiple tools simultaneously, and that also without a break.

Another factor that works like a love potion is the easy usage of this machine.

It employs an analogue pressure gauge having a large dial along with a straightforward control panel and a plain on/off switch.

Thus, it doesn’t take much effort on your part to put it into action to start supplying air for the project at hand.

The thing that you might not like is its noise level of 82 dBA. That’s because it doesn’t really conform to the definition of “quieter operation.”

Why Should You Buy Husky 60 Gallon Air Compressor?

The first of many reasons is its durable construction with enhanced lifespan at an economical price.

Next comes the power. This unit has an induction motor capable of releasing 3.7 horsepower and 155psi optimum pressure.

Thus, it can meet the demands of heavy-duty applications in any work environment.

The unit has a portable structure to make sure its settlement doesn’t give you much trouble.

Furthermore, it comes pre-set with thermal protection and employs simple controls so that anyone can operate it with the least hassle.

Finally, the unit entails a generous 2-years warranty to put a stamp on its reliability.

In the light of the above remarkable qualities and features, I pronounce this unit as one of the best 60-gallon air compressors in the mid-price range that is fully capable of catering to the needs of challenging DIY projects and heavy-duty commercial applications.

The powerful electrical motor and high-pressure airflow ensure that it will not disappoint you even when you power several tools with it at once.

You will finish the job without any hassle. There are a few shortcomings, but its excellent productivity won’t let you regret your decision.

So, if you want a huge bang for your bucks, you’ve most certainly found the right product to purchase.

Ivan Sanchez is a passionate blogger, traveler and certified Mechanic and moreover owns a Mechanic Shop in Norway too. He loves Painting Cars, Fixing them and a lot more. His father had a shop too where he used to sell Air Compressors, that's where Ivan learned about it and now reviewing some top-notch air compressors through this blog for you.